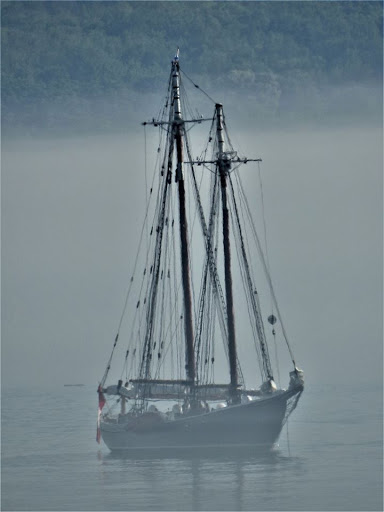 Photo Courtesy of Louis Comeau
Yesterday, the iconic Bluenose II sailed into Digby. Bluenose II is a goodwill ambassador ship for the province of Nova Scotia, as well as being a Canadian Icon. It is widely acknowledged as being one of the most beautiful boats in the world. The mainsail is the largest working mainsail in the world.
Bluenose II shares its name and design with the original Bluenose, a legendary schooner that defeated all American challengers in the Fisherman's Trophy races in the early 1920's.
One of our local residents, Louis Comeau, captured a beautiful, haunting image of Bluenose anchored in the mist of the Annapolis Basin.
As the day progressed the sun burned off the mist and we enjoyed the kind of idyllic summer weather we see so often this time of year here in Digby and Smiths Cove.
Labels: Annapolis Basin Bluenose Bluenose II Digby